An Overview of Breast Cancer 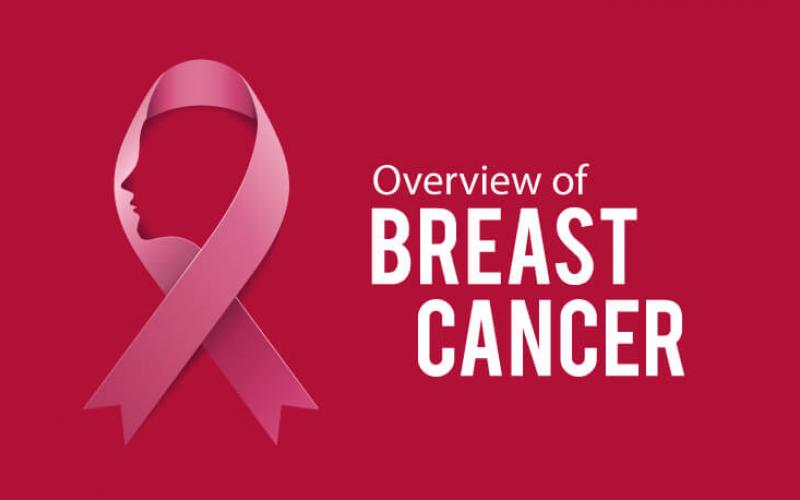 Cancer occurs when there are changes called mutations in genes that regulate cell growth. The mutations let the cells divide and multiply in an uncontrolled way.

A cancer that develops in the Breast cells is Breast Cancer. Typically, the cancer forms in either the lobules or ducts of the breast. Lobules produce milk, and ducts are the pathways to bring milk from the glands to the nipple. Cancer can also occur in the fatty tissue or fibrous connective tissue within your breast.

The risk of cancer is often being older and having breast cancer in the family. Risk goes up for women with certain types of benign breast lumps and for those who have had ovarian cancer.

Basically the risks associated to breast cancer are Being Female, Increasing Age, A personal history of Breast Cancer, A family history of Breast Cancer, Inherited genes that increase cancer risks, Radiation Exposure, Obesity, Beginning periods at a younger age, Beginning menopause at an older age, Having first child at an older age, Having never been pregnant, Postmenopausal hormone therapy, Drinking alcohol. Apart from this Thyroid Disease may also be a reason.

Signs and Symptoms of Breast Cancer:

Lump in the breast or underarm: A lump that is formed in your breast or underarm that doesn’t go away after your period. This is mostly the first symptom of breast cancer. Lumps associated with breast cancer are usually do not cause pain, although some may cause a prickly sensation. Lumps are usually seen on a mammogram long before one can see or feel them.
Swelling in the armpit, collarbone, or breast: Swelling in the armpit or clavicle could mean breast cancer has spread to lymph nodes in that area. This swelling may come before the lump is felt. Swelling in the breast might signal an aggressive type of cancer called inflammatory breast cancer.
Pain or tenderness in the breast: Although lumps are usually painless, pain or tenderness can be a sign of breast cancer.
A flat or indented area on the breast: This could be a tumor that can’t be seen or felt.
Breast changes: There is a difference in the size, contour, texture, or temperature of the breast.
A change in the nipple: The nipple could pull inward, get dimpled, burn, itch, develop sores.
Nipple discharge: An unusual discharge from the nipple can be noticed. It could be clear, bloody, or another color. Usually caused by benign conditions, it could be due to cancer too.
A marble like area under the skin: This area feels different from any other part of the breast and can be a sign.

Call the doctor about Breast Cancer if:

One or both the breasts develop an abnormal lump or pain that doesn’t go away, or may look or feel abnormal. The cause can be often something other than cancer, but a doctor should check it.
There are swollen lymph nodes in your armpits. Any swelling could be from cancer.

Breast Exam: Doctor is going to check both the breasts and lymph nodes in the armpit, feeling for any lumps or other abnormalities.
Mammogram: It is an X-ray of the breast. Mammograms are usually used to screen for breast cancer. If an abnormality is detected on a screening mammogram, the doctor may recommend a diagnostic mammogram to further evaluate that abnormality.
Breast ultrasound: Ultrasound may be used to determine whether a new breast lump is a solid mass or a fluid-filled cyst.
Removing sample of breast cells for testing (biopsy): A specialized needle device is used which is guided by X-ray or other imaging test to extract a core of tissue from the suspicious area.
Breast magnetic resonance imaging (MRI): An MRI machine uses a magnet and radio waves to create pictures of the breast interiors.
Breast Cancer early detection is important for the effective management of the disease. Although there is no current treatment for preventing breast cancer, early detection of the disease can lead to an excellent outcome.

Surgery is carried out to remove the whole breast, known as a mastectomy or to remove just the tumor and tissues around it, stated as a lumpectomy or breast-conserving surgery.
Radiation therapy uses high-energy waves in order to kill cancer cells.
Chemotherapy uses drugs to kill cancer cells. As much as these powerful medicines can fight the disease, they also can cause side effects such as nausea, hair loss, early menopause, hot flashes, and fatigue.
Hormone therapy uses drugs to prevent hormones mainly estrogen from fueling the growth of breast cancer cells. Medicines include tamoxifen (Nolvadex, Soltamox) for women before and after menopause and aromatase inhibitors including anastrozole (Arimidex), exemestane (Aromasin), and letrozole (Femara) for postmenopausal women.
Targeted therapy like lapatinib (Tykerb), pertuzumab (Perjeta), and trastuzumab (Herceptin) can be performed. These medicines prompt the immune system of the body to destroy cancer. They target breast cancer cells having high levels of a protein called HER2.